In bringing a German Shepherd into your home, you are making an addition to your family and he will quickly feel a part of it. Your house, your garden, your possessions and in fact all that you own will from then on be in his special care. He needs your love, but he also needs correct attention to his grooming, exercise, food, and general

welfare. Once given these, your German Shepherd will devote his very life to you.  Your life will be richer for this as well as for the companionship and love you both will share.

Before you decide whether to adopt one of our dogs, please take a minute to review the following Top Ten Myths of Adopting a MAGSR dog.

Myth 1: I have small children, so I want a puppy.

Without a doubt, this is the most common reason people want a puppy. A sweet, small puppy just seems like the best choice for sweet, small children.

You know that cute Kodak commercial with the puppies climbing all over the giggling little boy? Have you ever noticed how short it is? That’s because they could only film for a few seconds before the welts rose, the blood dripped, and the boy began to scream for his mother. Puppies have needle-teeth that they happily sink into anyone who walks by. They also have sharp nails that scratch when they jump up -- and on little Ryan, those front feet land right around his face. 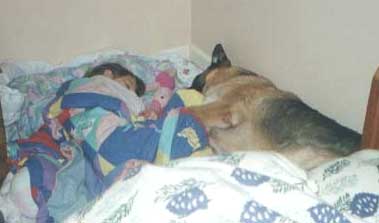 Puppies leave  "presents" that your toddler always seems to find before you do. Puppies wake your children during the night. And a puppy doesn’t know the difference between his stuffed toy and Sarah’s Piglet that she MUST have to fall asleep.

And suppose you get a puppy when little Morgan is 2. In six months, Morgan will be about 1 inch taller and 3 pounds heavier. However, the 8 month old puppy will now be as tall as Morgan and outweigh her by 30 pounds. And those baby teeth will have been replaced by big snappers that need to chew.

Of course, puppies and small children do successfully cohabitate. But, in our experience, your child will go through far less Neosporin and Band-Aids with a calmer 2 + year old dog who is road-tested with children.

Myth 2: It’s better to get a puppy. With an older dog, you never know what you’re getting.

Seems to make sense, except the exact opposite is true.  All puppies are cute; all puppies love everyone. It’s not until a dog hits sexual maturity that some innate behavioral problems start to surface.  We can’t even estimate how many calls we’ve had from people who paid thousands of dollars for a purebred puppy, who is now a year or two old and biting people, attacking other dogs, or engaging in some oddball neurotic behavior. Purebred is not the same as well-bred, and sometimes it feels like the disreputable breeders grossly outnumber the responsible ones.

Myth 3: If you train your dog right, he’ll stay in the yard without a fence.

Many people believe this, right up until the moment the dog is hit by a car, eats poison in the neighbor’s garage, or is stolen.  We insist on a fence or leash walks. Rescue dogs are typically either strays (which means they have a history of wandering) or owner-surrenders (which means they’re going to go look for their ex-owner first chance they get). We just can’t risk it.

Myth 4: When I was growing up, we had a PERFECT German Shepherd.

No, you didn’t.  Trust me, he was only perfect because you were 8 and didn’t have to clean up after him and be responsible for him. I know you believed he was perfect, but you also believed in Santa and honest government then, too.

I had a perfect GSD named Max when I was growing up. He died in my freshman year of college, and has since, in family lore, gone on to be canonized as "Saint Max". Bow your head when you say it.  Everyone in my family seems to forget the time St. Max was hit by a car he was chasing. Or the time he bit the kid biking by. Or how he used to sneak in and sleep on the furniture when no one was home. Or the time he had diarrhea all over the hardwood floors. Or how he used to eat the Christmas ornaments off the bottom half of the tree.

Since I’ve been an adult, I’ve never had a perfect German Shepherd--but every single one of them was perfect for me!

Myth 5: German Shepherds stop being puppies around a year old.

BUUUUZZZZZ! I’m sorry. Try 2 or 3. Many shepherds don’t calm down and hit their stride until they’re 4 or 5.  And you know that wonderful mental image you have of the stoic and noble shepherd sitting on the hill surveying his domain?  He’s 9!

Myth 6: I want a dog without dominance issues, so I want a female.

In the wacky world of GSDs, that’s just not true.  For starts, it’s impossible to make gender-based absolutes. But once you spend time around GSDs, you’ll start to notice there are plenty of hyper, dominant females out there. You’ll also notice lots of mellow, roll-with-the-punches males (especially after they make that all-important trip to Dr. Knife).

It all depends on the individual dog, but don’t think for a minute that a female is a sure ticket to a passive, submissive pooch.

Well, if they are, more breeds should mutate.

People who don’t like white shepherds are often, coincidentally, the same people who have never spent any time around them.  While the AKC does not YET recognize the whites, most other registration organizations, like the UKC, do!

Many die-hard black and tan’ers have had their minds changed by the fabulous whites that have come through MAGSR. And if you still don’t believe me, check out our Success Stories page.  For more information on the MANY GSD colors go here.

Myth 8: My 8 month old German Shepherd is biting people. He’s not lunging or growling, but he makes little nips on arms and legs. I can’t keep an aggressive dog.

The secret here is to look at the last 4 letters in the breed name: herd. German Shepherds herd. It’s what they do. And chances are, that’s all he’s doing to your friends and family.

This is called this mouthing. It’s what happens when those cute little puppy bites go uncorrected. And if your dog’s doing it, he will continue to do it--and do it harder and stronger--until you DO correct it.

Fortunately, it is relatively easy to fix in most dogs. There’s lots of tips on the internet (just search for "dog mouthing") and your vet can probably help as well. If the problem is really out of hand, you may need to call in a trainer for a few sessions.

Myth 9: I’m unsure about getting a rescue dog, because I’m afraid he won’t bond to me.

That sound you hear is all the people with rescued dogs falling over laughing. Because the exact opposite is nearly always true--your rescue dog will CLING to you.

Look at it from the dog’s perspective. He’s spent the bulk of the last year on a 6 foot chain in someone’s back yard because he committed the unconscionable sin of no longer being a puppy. At some point during the day, someone may remember to bring him food and water. The only attention he gets is when they yell at him for barking - or worse.

Finally, they take him for a car-ride--dumping him in a wooded area where he can have a "fighting chance." Despite everything, he waits there for their return or tries to get back home. He finds water somewhere. He raids trash cans and gets sick. If he’s extremely lucky, he survives long enough for an animal lover to find him and bring him to the shelter.

Then he sits in the loud, scary shelter run, starting to lose faith that his family will ever find him. The kennel people are nice, but he is one of a hundred needy dogs they have to care for so he gets no real attention.

Finally, the shelter calls us. And you take him home.

You not only bring him into your house, you give him his own bed and bowl, and maybe a crate where he feels safe. You speak quietly to him. When he messes on the carpet, you don’t seem to mind--you just take him outside and then clean it up. You feed him regularly AND give him toys and treats and nylabones. He sleeps in your room. He may even have a big brother or sister to play with. He gets kisses and hugs all the time for "no reason". And when he goes out in the car, he always comes back.

Your rescue dog’s biggest fear is that you will spontaneously combust.  GSDs are particularly sensitive about the connections with their people so once they have the attention they so desperately crave and need, they do whatever they can to ensure they never, ever lose it.  He’s not going to let you out of his sight for one minute. People with rescue dogs learn to function with a 70 pound shadow following us everywhere.

That said, there are some dogs who just never learned to connect with people, but that becomes apparent very quickly--long before we place him with you.

Myth 10: I don't want to have my rescue dog spayed or neutered because it's not natural/ she should be able to have a litter/I want my children to see the miracle of birth/etc.

MAGSR's spay/neuter policy is not negotiable. If everyone prevented irresponsible breeding, we'd be happily out of business. Do not humanize your dog--no one's asking you to neuter yourself. Your dog will be healthier and more comfortable once s/he's shifted into neutral--and will also be a much more pleasant companion.

Neutered male dogs roam less, mark less territory, and are generally less aggressive. Spayed female dogs avoid the messy and annoying heat cycles, and are not at risk for unwanted pregnancy. And both males and females are less likely to get certain illnesses.

As for the miracle of birth, well, there's another "rite of passage" occurring to 20 million dogs a year in this country, 25% of them purebred - euthanasia. It happens every day at your local animal shelter. But most parents are not as eager for their children to see that.

Article by Betsy Morris of MAGSR. Reprints (and modifications for breeds) permitted as long as you give us credit!

$ for MAGSR every time you walk! Get the free "Walk for a Dog" app at WoofTrax.com. Just install it, select Mid-Atlantic German Shepherd Rescue as your chosen rescue, and start walking!!!